In LEGO Inspiration today, we will show you what we found interesting in LEGO Technic set number 42057 Ultralight Helicopter.

Our squishy mango friend insisted on taking the wheel for our opening picture! This article covers only one of the two models that can be built with this set. This is one of the smaller LEGO Technic sets, but perhaps the neatest thing about it is the fact that it is so compact and simplistic but capable of doing so much. There are great examples of transverse gearing, gear trains, and pivot points controlling steering! 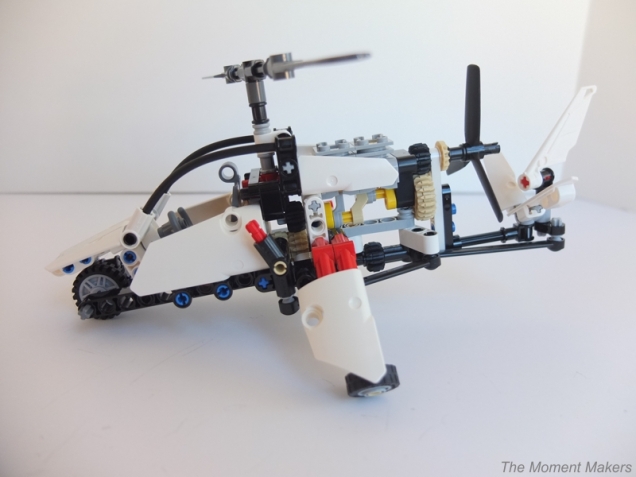 What good would a vehicle be if you didn’t have any steering? In our LEGO EV3 robots, we personally control steering by giving more power to either the left or the right wheel. That kind of steering doesn’t really apply here. It’s a helicopter! For this LEGO ultralight helicopter, a red “joystick” controls the steering mechanism; this red “joystick” takes the form of a red 2-long axle sticking out of a black angle element. When the red “joystick” is pushed or pulled, it controls the steering of the aileron (also known as a tail fin or rudder). This is accomplished thanks to a type of compound lever. The first part of this compound lever relies on two ball connectors attached to a 9-long black steering bar that pops onto the ball connectors at each end. The one ball connector is light grey and attaches to the joystick’s angle element directly. The other ball connector is a black friction snap connector that attaches to a three-long white Technic beam under the gears in the rear of the helicopter. This steering bar mixed with ball connectors is repeated in the second part of the compound lever which connects the three-long white Technic beam to a half beam at the base of the aileron. Check out the movement of the aileron in the picture above compared to the one below! 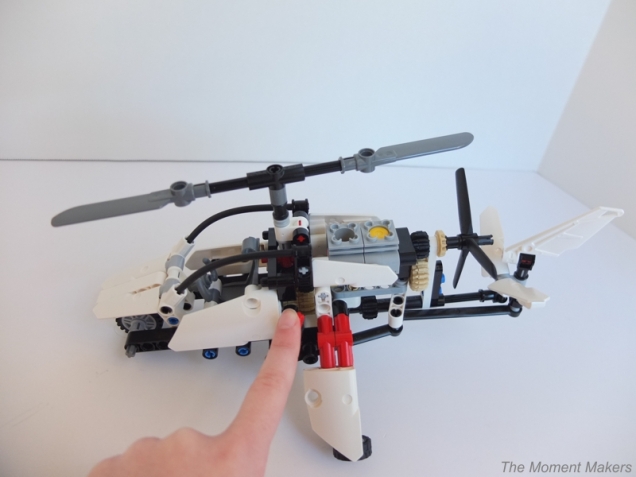 The pistons on this ultralight helicopter are obviously just for show, but they are a nice visual addition to this model. It is neat to see the pistons go up and down in an alternating fashion as the propellers turn.

The gearing on this model controls both propellers and the piston. When the propeller in the back is spun, it turns a short gear train (small black double bevel gear next to a medium tan double bevel gear). The tan gear on the gear train then turns an axle which the crankshaft is on. The crankshaft then causes the pistons to go up and down. Although this model was not designed for this, the pistons would be manipulating the propellers on a real ultralight.

One of the things we like best about this model is that the propellers on the back and the top turn together due to being attached with transaxles. It makes this ultralight helicopter really fun to play with, even if you are just fiddling with it while you think through deeper problems in your other LEGO building! The axle controlling the back propeller connects to the pistons and then hooks up to another axle at the end of the crankshaft. This axle is the short 3-long grey axle shown in the the center of the picture below with a black small double bevel gear on it. The black gear then turns two other gears. 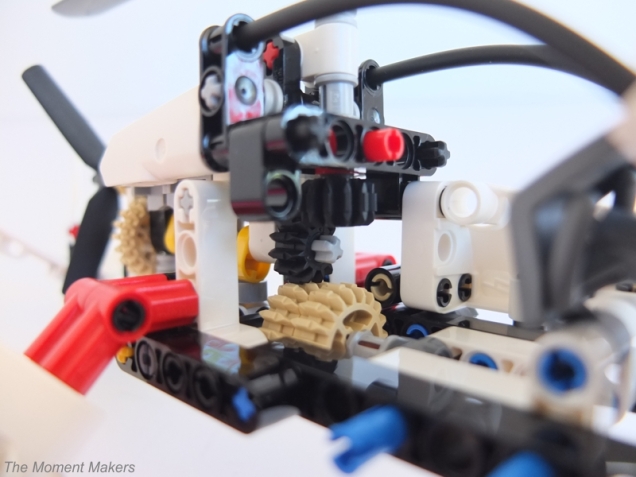 The second gear turned by the original black gear creates a small gear train. The tan gear shares its axle to another gear identical to it. The purpose of these gears is to make it easier to cause the propellers to turn.

You may have noticed two gears in this model that don’t seem to be doing anything. These gears are here because they are only needed in the second build of this set. Also, as we mentioned in past articles, we do not put stickers on our LEGO Technic sets. This is because it is against the rules in FLL to put non-lego pieces on your robot and you might find the need to use them if you are low on pieces.

We hope you enjoyed our article!