LEGO is pretty generous. In all of their sets, they have some extra pieces that are left over after following building instructions, but LEGO only gives you very small extra pieces, like studs, connectors, half bushes, etc. LEGO almost never gives you large extra pieces. If you have a large piece left over after building a set, check through the instructions again to see if you missed putting that piece in the model as part of the steps. In recent LEGO sets, each step has an inventory listed for the step. To avoid leaving pieces out while we build, we like to find the pieces for each step and make sure we use them all before moving on. When we have a large piece like a full brick or beam left over, we scan the inventory listed for each step to look for the type/color of piece we have left over. Usually, we find the step we overlooked that piece. It has happened to us many times in different LEGO sets we build.

Here is a short TRUE story about a very unlikely happening:

It was a bright and sunny afternoon when we heard a truck come to my house during one of our FIRST LEGO League meetings. A moment later, we heard a knock knock, and silence filled the room. Everyone excitedly dashed to the open the door, because our new FIRST LEGO League field kit had just arrived. I ran out and picked up the package. Then we excitedly opened the box to see the new mat and bags of pieces from LEGO Education. Our team started building the mission models right away. As we finished building models, each bag had a couple of small extra pieces, like a few connectors, studs, etc. We bagged up the extra pieces in case we needed them later for repairs.

First, we checked over the instructions for bag #7 several times, but we did not find a place for the extra beam. So, we assumed that the extra beam was maybe put in the wrong bag and would be used in instructions later. The next day the team got together, we finished building all of the mission models. The extra 11-long beam was still never used. DUN DUN DUN DUUUUUUUN!

Now it was time to check all the inventories for each step within each model. We decided to have each of us do it separately and not share results until the end, so we would not effect each other’s results. So, each of us scanned the step inventories, looking for the medium grey 11-long beam and wrote tally marks each time the beam appeared. 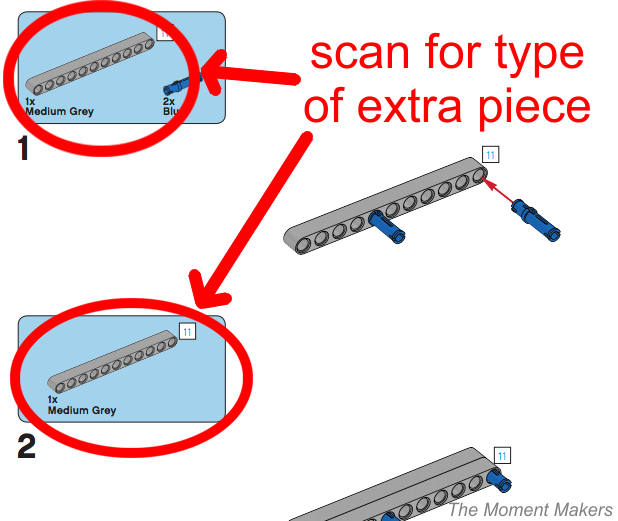 When we were all done, we counted up our tallies, and compared them. We all had the same results.

The beam only showed up in the instructions 21 times. We counted the beam in use on our models 21 times. LEGO had given us 22 of the beams. The overall inventory for the field kit set showed 22 as the quantity for that piece. Somehow, the 22nd medium grey 11-long beam was an extra! DUN DUN DUN DUUUUUUUN!

The moral to this story is “just because some things are unlikely doesn’t mean it’s impossible.”