In LEGO Inspiration today, we will show you what we found interesting in LEGO Technic set number 42060 Roadwork Crew. This is one of the smaller Technic sets available, but it has some great functionality that we can carry over into EV3 robot building.

LEGO Technic set number 42060 Roadwork Crew has 2 models included, so we decided to split this into 2 articles to make it easier. Today we will be talking about the tracked digger.

This tracked digger part of LEGO Technic set number 42060 Roadwork Crew that we will talk about today, we named Scoop. She is a very close friend with Mr. Cherry Picker that we discussed the 42031 Cherry Picker article. Although different pieces are used, there are a lot of similarities in how they work. 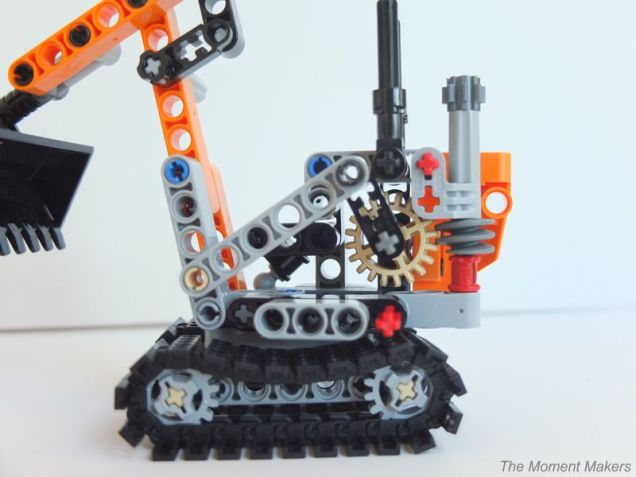 Scoop, like Mr. Cherry Picker, has a worm gear. Scoop’s worm gear is a little different from Mr. Cherry Picker’s, but it works the same way. Although, it is used in a different manner, which we will go on to explain. First, worm gears, as some of you know, must always act as a driver gear when compared to the gear intertwined with it (in this case a beige double bevel gear). Worm gears are also cool in that if you try to turn the idler gear itself, it does not move. However, if you turn the worm gear, it turns just fine, and the worm gear will subsequently turn the beige idler gear. You can test this with a worm gear and another gear if you want. The great thing about this aspect of a worm gear is that it lets you hold a lever arm up, without gravity causing it to keep slipping downward.

The digger arm moves up and down, but this lever arm is not directly attached to the follower gear like it is in many builds. As you can see the pivot point is not on the gear’s axle, but the pivot point is far away from it. A 6-long half beam and specialty black 3-long beam (part number 33299) connect the beige double bevel gear to the digger arm lever. This lever operates as a third-class lever. Having the gearing separate from the lever arm is a concept that many beginning EV3 builders do not consider. However, when building a mission-performing robot, having the lever arm a distance a way might be useful with space considerations.

Another Part of the Scoop Mechanism

There is another part of the scoop mechanism, that has a pivot point higher up on the arm we were just talking about, that controls closer to the digger piece.

Arm moved close to the model.

Arm moved away from the model. Again, the arm is not controlled at the pivot point directly. It is controlled a short distance away (in this case directly by your fingers without any gearing). This part of the model utilizes a first-class lever.

Tracks/Tracks Connecting with a Friction Connector

Up above are tracks. Tracks are used instead of wheels. Tracks can be unpredictable with slippage, but they can be really useful on rough terrain. 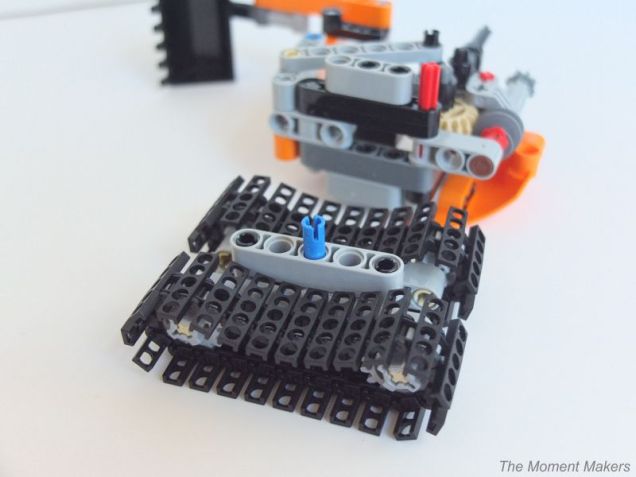 The last thing we want to talk about is how the tracks connect with the model. As you can see the way it connects is with a blue 3-long friction connector. LEGO probably uses this so the top can turn, but it still allows some friction to make sure when people play with it, it will not simply turn around on it’s own. As we mentioned here in a previous article, friction connectors are sometimes used even when some movement is desired; the friction-part of them simply wear out over time.

We hope you liked this article! Thank you for reading it!