In LEGO Inspiration today, we will show you what we found interesting in LEGO Technic set number 42069 Extreme Adventure.

This is one of the larger LEGO Technic sets, but with its size comes lots of cool gearing and features. We have found many neat and inspiring things about this set. We named ours “Purple Snow” because of its color and because it was shown on the box with a snow background. We sometimes have our pom-pom owls that we made drive in it because they are the perfect size. We have had lots of fun with this set!

You can steer this massive 17 inch truck by just turning the gear on the top of it in the direction you want it to drive!

The gear is on an axle that runs behind the two front seats and all the way to the bottom of the truck.

In the picture above looking at the underside of the vehicle, the black gear pointed to on the left attaches to the axle shown in the picture before this one and all the way to the steering gear on top of the truck. Through transverse gears, the movement then changes to the red axle perpendicular to the original one and pointed towards the front set of treads.

This new axle then continues down and turns a gear that interlocks with a gear rack. The gear stays in a fixed place while the gear rack is allowed to move to the left or right when the gear turns.

The gear rack is attached to a point near the front of each of the forward treads, allowing tilting of these treads to the left or right side of the vehicle. As the gear turns and the rack moves side to side, the rack tilts the front two treads, allowing the truck to steer.

The hood can be manually raised and lowered. It is able to stay lifted because friction connectors are used at the pivot point. 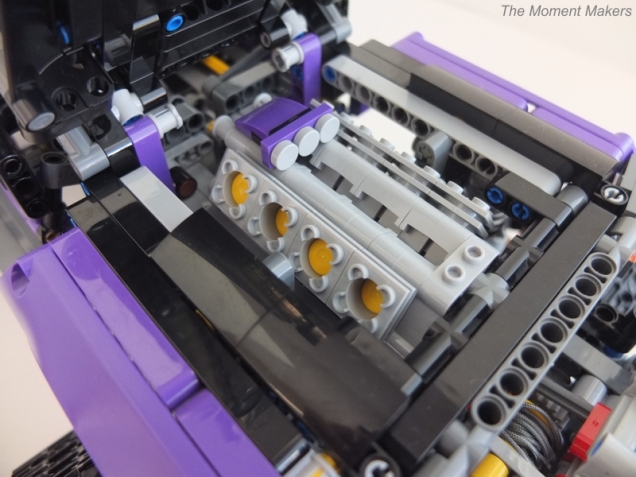 Under the hood, the engine has eight yellow pistons. As the treads turn, the gearing  inside causes the pistons to go up and down. For this model, it does not help the driving action, but the pistons make this model look really cool! 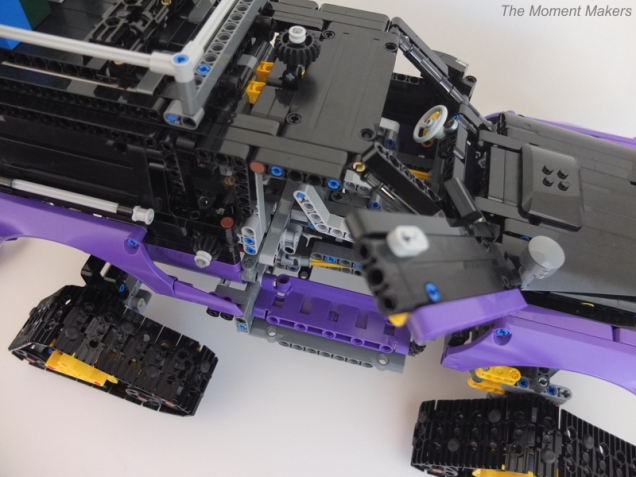 This awesome truck has doors that can flip upward, while the bottom most purple part of the door folds down flat to step on!

A LEGO Technic spring is stretched to provide resistance when you open the door by hand. This same stretched spring allows the doors to spring back into the closed position quickly with only a little bit of force.

This awesome truck can drive over books, toys, and even LEGOs! How does it do this?

First of all the truck uses treads with rubber pieces on them which helps it grip onto the object it is going over for added traction.

It also has suspension of both sets of treads with the help of LEGO springs, but the truck still needs more help to drive over things. 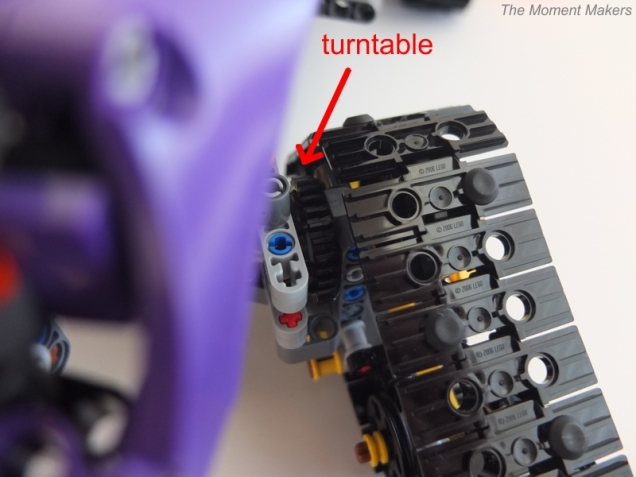 The secret is that LEGO used a small turntable piece (piece Z28) to connect the treads to the truck’s body. The turntable is actually made up of two separate pieces. The pieces 99009 and 99010 together have gear teeth on the outside and two connector holes on each side, but between the two connectors is a smooth area which makes the piece able to turn.

Wait a minute… How does a turntable help this model drive over things? The answer to that question is that the turntable makes the treads able to tilt up and down. To be able to climb up a small hill, your feet must first slant to become parallel with the ground. The treads on this truck must do this as well. The turntable piece helps the truck achieve this action. 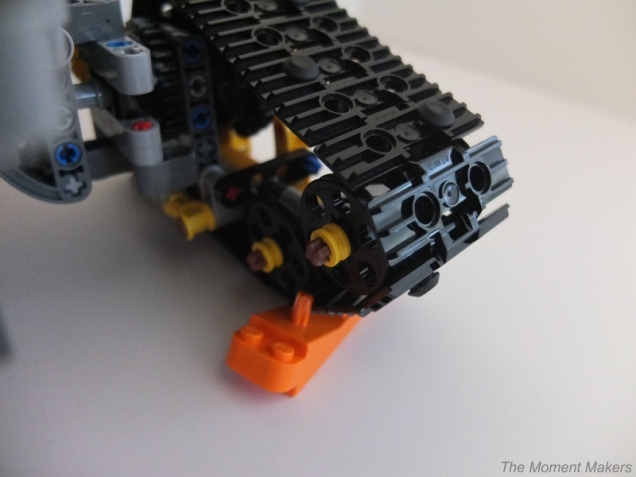 The truck has a trunk in the back. If you try to just pull the knob THE DOOR WILL NOT BUDGE! You need to unlock the door first, by instead turning the knob counter-clockwise before pulling the door open.

Why does it only work this way? Pulling it will not work because there is a beam connected to the knob from the inside of the door that goes around a piece within the truck.

Once you have opened the trunk, you can stow all the equipment you will be taking on your adventure!

There is also drawer inside to fit more supplies (in this case, a snow shovel). The trunk also has a window for it so you can see the objects in it even if the trunk door is closed.

If you are lazy, then all you have to do to access the trunk space is to turn the gear on the left side of the truck. This causes the roof of the trunk to come up!

As the gear on the side turns counter-clockwise, the linear actuator expands. This causes the top of the trunk to lift. 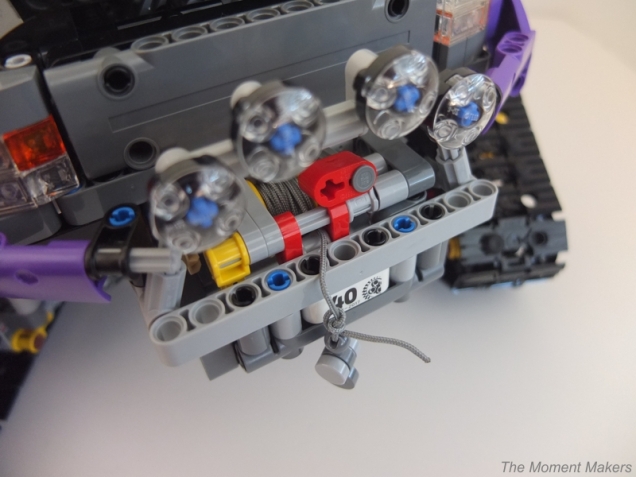 If you want to pull things with this truck, all you have to do is pull up the 2-long half red piece on the front of the truck and turn the gear on the right side of the truck counter-clockwise and a rope attached to a hook will come out the front! The red piece is able to lock the spool in place because there is a bush on its axle. This bush meshes with another gear attached to the spool, preventing the spool from turning.

The gear that you turn on the side of the truck changes its direction of movement with transverse gearing so that it turns an axle pointing towards the front of the truck. 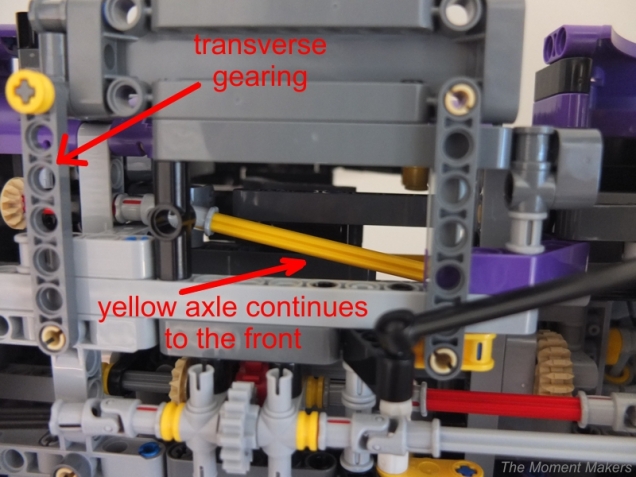 That axle then continues all the way to the front.

The other end of the axle then turns the gear attached to the spool. When the spool turns, the hook is able to come out!

Near the trunk there are two side compartments to store fire extinguishers, mail, and anything else you wish to bring with you (with all this storage space, we are DEFINITELY using this on our next vacation!). They are opened by pulling up on the bars on their exterior. Similar to the hood, the compartment doors have friction connectors at the pivot point.

For EV3 and FLL builders, this set has a lot of great examples of gearing to transfer motion across fairly long distances and changing direction. It is also great to see linear actuators and LEGO springs in action, so that you can consider how those might help your robot function in different ways.

If you wish to eventually use some of these parts for other purposes, do NOT put stickers on Technic sets. You might need to use the piece if you run out of pieces. You are also not allowed to use pieces with stickers on them in FLL.

Thank you for reading this article!